WHAT DOES ONE LIVE ON? 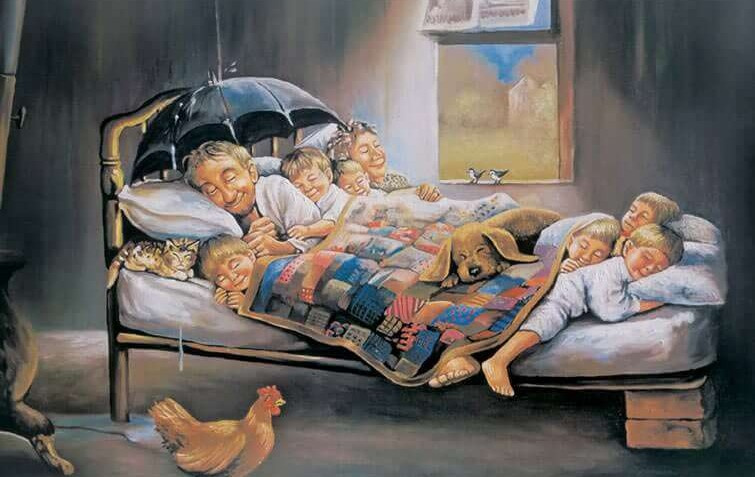 “If only we wanted to be happy, it would be easy; but we want to be happier than other people, which is difficult, since we think them happier than they are.”

Man is the highest of all creatures. It is neither his physical strength nor the beauty of his face or skin that renders him superior to other creatures. It is his mind as well as his unique will that renders him precious. This alone provides us with clues about the essence of man. The feature that makes man superior to other creatures is the foundation we should build upon. This foundation is crucial for us to understand man’s past, present, and future. Just like a single man is a universe, so is the union of persons that makes up a society. In both cases, it is of great importance that man be addressed as a person for us to understand the significance of man.

A bomb can destroy in seconds a palace built by a thousand people after years of hard work. Likewise, a work by a master artisan cannot be made through the collaboration of hundreds of people. Man therefore means as much for the society as he does as an individual. Just as every value and behavior that will make him happy, peaceful and productive is important for the individual, these behaviors are equally important for the society. It’s for this very reason that we ask the question “What do man live on?” This question is to focus on that which man’s soul, heart and conscience, rather than his body, live on? Like Sabahattin Ali said, “Man couldn’t have come to world to eat, to drink, to go to bed with someone. There had to be a bigger, a more human thing…”

“If we want to be happy, we have to believe that real life exists not in the body but in the soul,” says Tolstoy. The modern man who has lost his direction should make a guide of this statement just like a hiker having lost his way in the forest embraces the North Star to get his bearings. Contemporary people, who try to find happiness in material things and sink further down as they struggle, look like the desperate man who tries to quench his thirst by drinking sea water. Like a thing sought in the wrong place can never be found, man who seeks happiness in his body and peace in money and material things will never find what he is after. If he does, it will be his undoing.

It is for this reason that Friedrich Nietzsche seeks “the superman.”It is an undeniable fact that we as a society have a thirst for the superman, although I find Nietzsche’s arguments for getting to him wrong. He argued that man had to strip off all ideological and existential characteristics; belief, morality and systems were unnecessary and these were against man’s nature; and without getting rid of these, it was not possible to reach the superman. Man however is very precious and venerable. This value and significance is based on his essence, on his interaction with every creation. The main problem is corrupt egos of individuals who are ready to compete with others for property, possessions and positions, feel unbound by any rule, and cause damages to both themselves and the society. True man is that from whose hand and tongue others feel safe. The problem that man has to address, on the other hand, is how to help the individual man preserve his essence. This can only happen when man feels spiritually happy and peaceful. Consequently, for a solution to the problem, it is essential that man have not started to rot vis-à-vis his physical and spiritual anatomy.

Running water remains alive and still water smells. In the same vein, it is essential that man always keep his soul alive. As long as he keeps his soul young and active, man will strip of his body, leave behind the form, and embrace the substance. And man will be happy as much as he makes others happy. As he feels happy, his soul will rise like a turtledove. A teacher who strips of his material being will be happy to the extent that he struggles to contribute to his student. A doctor will be happy when he feels certain that he has done his best for his patient. A police officer or a judge will be happy to the extent that he is particular about enforcing the law better. And a parent will be happy to the extent that he spends more time with his child despite the presence of the TV and Internet. A youngster will realize himself and reach real maturity when he shows compassion to an animal near at hand, rather than abuse and torture it. In a nutshell, it is what man does for others that renders him happy and precious. I believe a study published by The New York Times titled “Married people are happier than unmarried people and are more satisfied with their life” will make the argument clearer. Marriage means sacrifice. It means living life on a common denominator. It is spouses’ forgoing their own desires, making their partners happy, and becoming happy as a consequence. Self-control and forgiveness are more common in married people than in unmarried people. More often than not, this attitude almost always makes the pleaser smile rather than the pleased.

A person will not be happy but look happy when he owns a super luxury car or uses the best cell phone or wear highest quality clothes. A person who shares everything on the social media, and seeks others’ appreciation and approval are unhappy people who have based happiness on other people’s gazes and likes. However, this person will never be happy. As I shared at the beginning of my essay, French political philosopher Charles de Montesquieu once said, “If only we wanted to be happy, it would be easy; but we want to be happier than other people, which is difficult, since we think them happier than they are.”

On the other hand, a person who helps a patient, someone in need, or any person for that matter won’t want to make it known because this behavior will already make him happy on the inside and he won’t need others’ appreciation or approval. This psychological feature of man shows that man lives as much as he makes others happy and he lives by this real peace and happiness.

Water has always run by

The river’s dried, time’s up

So many khans, so many sultans

Left their thrones and gone by

The world is a window

Every comer’s seen and walked by